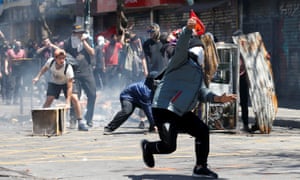 Latin America’s most prosperous country is braced for fresh upheaval after Chile’s president expanded a state of emergency beyond the capital and the death toll from three days of violence rose to 11.

“We are at war with a powerful and uncompromising enemy that respects nothing and no one,” Sebastián Piñera declared in an unyielding late-night address on Sunday.