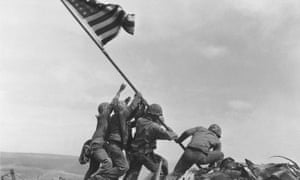 Military confirms identity of Harold ‘Pie’ Keller, three years after the discovery of another misidentified figure in the image

It’s a case of mistaken identity for a celebrated second world war photograph: six troops raise up an American flag in Iwo Jima, Japan. The photo has been printed in history books, displayed in museums, and even won a Pulitzer Prize. But for over 70 years, one of the figures appears to have been misidentified.

Three historians established that for seven decades, Cpl Harold “Pie” Keller has wrongly been identified as Pfc Rene Gagnon in the 23 February 1945 photo.

U.S. Representative Adam Schiff, the chairman of the House Intelligence Committee, said on Wednesday the committee will make public transcripts of interviews conducted with witnesses in the impeachment probe of President Donald Trump.

Really strange letter, even for Trump

US President Donald Trump tells Recep Tayyip Erdogan that the Turkish President will looked upon “forever as the devil” in a letter sent after US troops were ordered to withdraw from northern Syria.

Separation of church and state says no, unless they want mandatory classes in Torah, Hindu, Islamic, Sikh, Tao, Shintoism, Buddha, Bahai and Wicca texts too in a universal religions class.

In case you were under the misguided impression there was still some semblance of the separation of church and state in this quickly deteriorating nation, a new proposed bill in Florida would require public schools to offer Bible classes. Betsy must love it!

But he sent troops to Saudi Arabia? What a liar and a fool! Donald Trump has said that Turkey’s military campaign against Syrian Kurds is not Washington’s problem. However, he has imposed economic sanctions against Ankara and sent VP Mike Pence to Turkey to discuss the offensive.

Staff members in the regional office said they had no advance knowledge of a wide-ranging agency complaint against the state and described the process as highly unusual.

“I view the situation on the Turkish border with Syria to be, for the United States, strategically brilliant,” Trump said. “Our soldiers are out of there, they’re totally safe.” The claim was untrue. There are reported to be hundreds of US troops still in the border area, where they have come under fire from Turkish-backed forces. The president seemed unaware or in denial of the precarious and volatile situation in the region for US troops and the Kurdish inhabitants. As for the Kurds, Trump showed no remorse for abandoning local partners who had lost 11,000 soldiers fighting under US direction against Isis. “Our soldiers are not in harm’s way, as they shouldn’t be as two countries fight over land. That has nothing to do with us,” Trump said. “The Kurds are much safer right now, but the Kurds know how to fight. And as I said they’re not angels, they’re not angels. “We paid a lot of money for them to fight with us and that’s OK,” the president went on. “They did well when they fought with us they didn’t do so well when they didn’t fight with us.” At one point, the US president declared the Kurdish insurgents in Turkey (the PKK), strongly linked to Kurdish forces in Syria, were

Source: Trump claims Kurds ‘no angels’ as he boasts of his own ‘brilliant’ strategy | US news | The Guardian

An investigation found that Bible fragments in a museum started by the owners of the arts-and-crafts chain had been illegally taken from the university.
— Read on www.nytimes.com/2019/10/16/world/europe/oxford-professor-bible-hobby-lobby.html