The former Fort Worth police officer who fatally shot a woman through her bedroom window this weekend was charged with murder on Monday and booked into jail without the possibility for bond, according to the Fort Worth Police Department. The officer, Aaron Y. Dean, had resigned earlier on Monday, hours before the police chief had planned to fire him amid the community’s growing anger and frustration after the death of the woman, Atatiana Jefferson.

A three-judge panel of the U.S. Court of Appeals for the Ninth Circuit has granted a stay of execution for federal death row prisoner Lezmond Mitchell to prevent the U.S. government from executing him before the court can review an on-going appeal concerning possible anti-Native American bias in his case. Mitchell, who was scheduled to be executed on December 11, 2019, is a member of the Navajo Nation and the only Native American on federal death row. His case is one of several in the past year highlighting the tension between tribal sovereignty and the pursuit of the death penalty by state and federal officials.

When the Department of Justice announced in July its intention to execute Mitchell and four other federal death-row prisoners in a five-week span from December 9, 2019 through January 15, 2020, it falsely claimed that the prisoners had all exhausted their appeals and that it was carrying out the executions to advance the interests of the victims’ families. In fact, although Mitchell’s initial appeals had been denied, he was in the midst of litigation in the federal courts and had been granted a “certificate of appealability,” meaning that the courts considered the issues he raised to be worthy of further judicial review. Both the Navajo Nation and the victims’ family told federal prosecutors at the time of trial that they opposed the government seeking the death penalty in the case.

Mitchell’s attorneys argued that his scheduled execution would interfere with continuing legal challenges to the constitutionality of his death sentence. They asked “for a stay of execution such that he may litigate his appeal [concerning anti-Native American bias] to conclusion.” A split panel of the federal appeals court voted 2-1 on October 4 to grant the stay so that briefing could be completed in the case and scheduled argument on the appeal for December 13.

In 2017, the U.S. Supreme Court ruled in Pena-Rodriguez v. Colorado that statements by jurors that their verdict was influenced by racial stereotypes or animus were admissible to challenge the constitutionality of a defendant’s conviction. Mitchell’s lawyers sought to interview jurors about potential racial bias in his case, citing bias in the charging decision, the exclusion of Native American prospective jurors, and a closing argument that “was riddled with comment” disparaging Mitchell’s “religious beliefs and Navajo culture.” The district court refused to permit Mitchell to talk to jurors, relying on an Arizona procedural rule barring juror interviews. Mitchell then asked the Ninth Circuit for permission to appeal. On April 25, the Ninth Circuit found that he had presented sufficient basis for appeal and set a briefing schedule for the case. Notwithstanding this ruling, Attorney General Barr announced Mitchell’s execution date on July 25.

US President Donald Trump has called for an immediate ceasefire in Turkey’s strikes against Kurds in Syria. Vice President Mike Pence is set to lead mediation efforts in the region. Earlier, Trump had pledged sanctions.

“Try to make yourself imposing and loud,” he said. “In the vast majority of cases, that will cause the coyote to alter its course probably go into the adjacent field or woods.”   Gregory said it’s not a good idea to run away, although that might be the natural instinct. “Whether or not the coyote is actually bold or aggressive, it can just trigger an instinct to chase,” he said. If the coyote does not retreat, Gregory advised backing away while continuing to face it until it is out of sight, then returning to your vehicle.

Source: What to do if you meet a coyote? Wave a big stick and don’t run away | CBC News 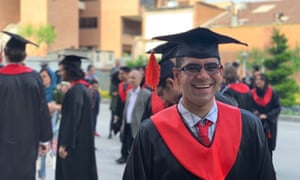 They had been accepted to prestigious postgraduate programs, many in California, but they got no further than the airport

On 9 September, Milad Aghajohari and much of his extended family piled into cars and drove six hours from Isfahan to Tehran’s international airport. The 22-year-old was on his way to California, set to start a PhD program at Stanford University.

After wishing everyone goodbye, Aghajohari rolled his suitcases into the terminal. He handed his passport to a Turkish Airlines officer and placed his luggage on a scale. A moment later, a senior airline official pulled Aghajohari aside and showed him an email, which said it was “strictly advised” Aghajohari not board the flight. The initials of US Customs and Border Protection were written beneath the message. “In a few seconds,” Aghajohari said, “I went from being a Stanford student to being seen as a potentially dangerous person.” 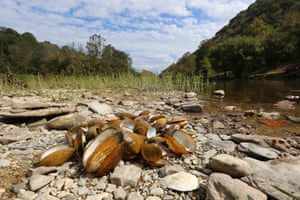 Mussels, the backbone of the river ecosystem because they control silt levels and filter water, are facing a mysterious affliction

Each fall since 2016, wildlife biologist Jordan Richard has returned to the same portion of the Clinch River in Tennessee, braced for the worst – tens of thousands of newly dead mussel shells gleaming from the surface of the water.

The mass die-off isn’t recognizable at first. But once Richard sees the first freshwater mussel, which look quite different to their marine cousins of moules frite fame, he scans the river and finds another every five to 10 seconds.

The prime minister wanted to shoot Labour’s fox but he has no plans, no vision – just focus-grouped pleasers

Folderol, hokum and flapdoodle – the usual absurdities of the Queen’s speech rigmarole were reduced to their ultimate fatuity on Monday. As she named those 26 never-to-be-enacted bills engraved laboriously on goatskin vellum, they might as well have been scribbled in ballpoint pen, these electioneering geegaws and giveaways, embellished with thumbscrews on crime and migration. But nothing matters here except the evanescent promise of an EU withdrawal deal, always just beyond reach. “My government will …” she intoned as if sucking lemons, but she has no government capable of doing anything at all.

What heavy lifting it would take to turn this country into Boris Johnson’s “greatest place on Earth”, in its present miserable state caused mainly by him. Leave aside Brexit devilment that hangs by a thread, look at the rest of his empty prospectus. If this was a hunting expedition designed to shoot Labour’s fox, it may have the opposite effect.