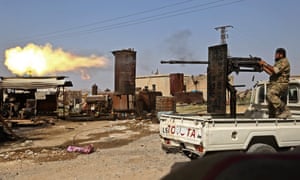 At least 750 people with suspected links to Islamic State have reportedly fled a displacement camp in north-east Syria, local officials have said, raising fears that the Turkish offensive against Kurdish forces in the area could lead Isis to regain strength amid the chaos.

The 249 women and 700 children of the “caliphate” held in a secure annex at the Ain Issa camp began to panic and riot and scared away the guards after Turkish shelling struck close to the area on Sunday, said Abdulkader Mwahed, the joint president for humanitarian affairs in the Kurdish-held part of Syria, in a statement.