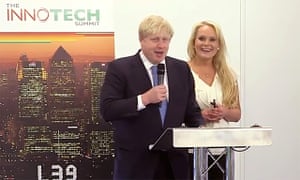 Boris Johnson has been formally referred for potential investigation into whether he committed the criminal offence of misconduct in public office, over allegations about a conflict of interest with a US businesswoman while he was mayor of London.

An official from the Greater London Authority, the city’s devolved government, has written to the prime minister noting claims he had “on more than one occasion” used his position as mayor to “benefit and reward” Jennifer Arcuri, a tech entrepreneur.