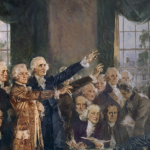 The Library of Congress has created a new website for its Constitution Annotated, known officially as the “Constitution of the United States of America: Analysis and Interpretation.” For over 100 years, Constitution Annotated has served as the authoritative source for the American public to learn about the nation’s founding document alongside Supreme Court decisions that have expounded upon and refined it. The newest update, announced just in time for Constitution Day on September 17, is the latest in a string of efforts to bring the project fully into the digital era.

The new site, constitution.congress.gov, is home to a revamped, user-friendly version of the 3,000-page document, which for the first time ever is fully digitally searchable by the general public.

Librarian of Congress Carla Hayden described the site launch as “a great example of what we mean when we say we’re putting our users first.” Hayden emphasized that the new version transforms “the most comprehensive analysis of our Constitution” into a database that is “easier for everyone to use.”