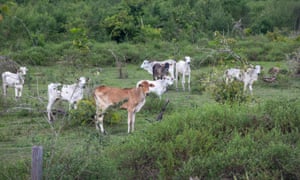 The world’s biggest supplier of burgers sourced meat from a farmer in the Amazon who had been found guilty of using deforested land, say reports, even as new figures reveal the beef industry’s deforestation risks.

Marfrig, a Brazilian meat company that has supplied McDonald’s, Burger King and other fast-food chains around the world, bought cattle from a farm that had been using deforested land earlier this year, according to a joint investigation by Repórter Brasil and the Bureau of Investigative Journalism.