As regional leaders gather for a summit on protecting the Amazon, where fires are raging, Indigenous leaders say they have forest knowledge politicians cannot afford to overlook. LETICIA, Colombia – Sitting in a circle in a wooden shack on the outskirts of Leticia, the capital of Colombia’s Amazonas province, Indigenous leaders savoured powdered coca leaves […] 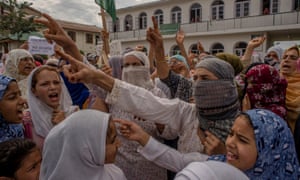 Kashmir is under siege. Up to 10,000 people have been victims of enforced disappearance, including my son Javaid

The Eid this year was like no other. We could not even offer the obligatory sacrifice because of the total siege by India of Kashmir.

When my son Yasir went to fetch bread in the morning and didn’t return promptly, I started pacing with worry outside the house. What if the security forces manning every corner had roughed him up, or even worse? My fear is the fear of every single person living in shock in Kashmir and wondering “What next?” Eventually he returned, explaining that the delay was due to long queues at the only bakery open in the entire area. But unlike Yasir, my son Javaid has never returned.

Remains were of William Moldt, who went missing in November 1997 at the age of 40 after leaving a nightclub

It took 22 years, but a missing man’s remains were finally found thanks to someone who zoomed in on his former Florida neighborhood with Google satellite images and noticed a car submerged in a lake, authorities said.

The skeletal remains were of William Moldt, who went missing in 1997 at the age of 40, according to the Palm Beach county sheriff’s office.

He was second guy for best President in this century but he lost out in two runs for President so, he is an also ran. Voters who waited in lines for hours to vote for President Obama twice, will not sow up for Joe – plain and simple – He’s not the guy! Harris and/or maybe Castro would generate the votes needed to bring USA back from the brink!

Benjamin Wallace-Wells assesses Joe Biden’s campaign for the Democratic Presidential nomination so far, and foreshadows how the candidate might perform in the Democratic debates in Houston, which will pit him against Elizabeth Warren and Bernie Sanders.