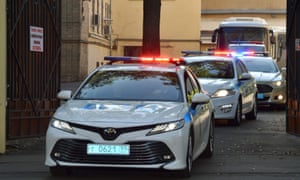 Kyiv and Moscow have exchanged dozens of prisoners in a dramatic operation that resulted in freedom for 24 Ukrainian sailors taken captive by Russia, as well as a potential suspect and key witness in the downing of Malaysian Airlines flight MH17.

The Ukrainian president, Volodymyr Zelenskiy, was on the tarmac at Kyiv’s Boryspil airport to greet the prisoners released by Russia on Saturday morning. There were emotional scenes as family members were reunited on the runway.

Oleg Sentsov, a film-maker sentenced to 20 years by Russia on hotly disputed “terrorism” charges, was also among those released.