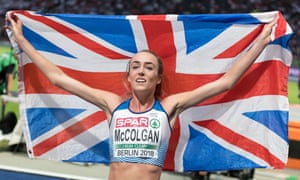 Scottish middle-distance runner Eilish McColgan has hit out at people who describe her as “skinny”, telling them to “go body shame elsewhere”.

McColgan, who won silver for Great Britain in the 5000m at last year’s European Championships in Berlin, made the comment on Twitter. She wrote: “Nothing pisses me off more than someone making a comment that I’m ‘too skinny’. I’m naturally small-always have been. Some people are just slim! I doubt they would comment on someone slightly larger than ‘average’. I’m a healthy athlete and human. Go body shame elsewhere!”