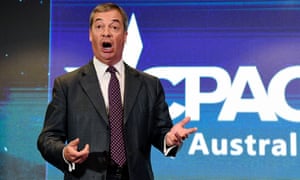 Nigel Farage has derided the Duke and Duchess of Sussex for their “irrelevant” social justice and environmental campaigns while abusing Prince Charles and describing the late Queen Mother as an “overweight, chain-smoking gin drinker”, in an incendiary speech to an Australian rightwing political conference.

Farage’s speech to Sydney’s Conservative Political Action Conference – from which media were barred – ranged across his views on Brexit, media bias and the United Nations, but he reserved his fiercest condemnation for members of the royal family, including princes Charles and Harry, and the Queen Mother.