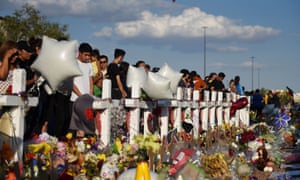 Promoting violence has always been part of Trump’s brand. The consequences are all too real

From his campaign rhetoric to his daily onslaught of divisive tweets issued under the banner of the presidential seal, Donald Trump has stoked the flames of white fear and hate to fuel his own power. No longer hiding behind what philosopher Jennifer Saul has called “racial fig leaves”, Trump’s language has become increasingly explicit and vitriolic. His fans are following suit with ever more violent actions. It can be hard to make a causal claim connecting speech and action, between nasty discourse and harms that go beyond the social or psychological. But there is a case to be made.

Related: A couple married for 60 years, a veteran, a teacher: the lives cut short in El Paso