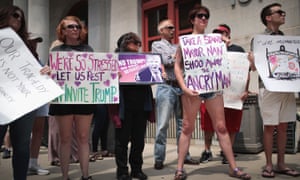 Donald Trump is likely to receive a cool reception, at best, when he touches down in El Paso, Texas, on Wednesday, three days after a 21-year-old gunman who invoked the language of white supremacy killed 22 people and wounded 24 more in a suburban Walmart superstore there.

The president could also face protests in Dayton, Ohio, the location of the second of two mass shootings at the weekend, where nine were killed by a man who investigators said on Tuesday explored violent ideologies.