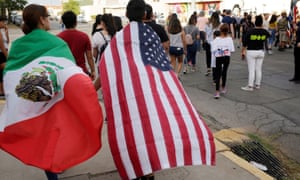 This conspiracy theory is influencing killers from Germany to New Zealand and now, it seems, El Paso

“This attack is a response to the Hispanic invasion of Texas.” Those were the words that appeared in a manifesto published shortly before the deadly shooting in El Paso on Saturday. More than half of so-called “alt-right killers” are motivated by the “white replacement” theory, which refers to the belief that white people will be systematically replaced by black and brown migrants. The killer in El Paso, who law enforcement believes authored the memo, is apparently no exception.

The white replacement theory is actually made up of two sub-conspiracies: “the great replacement” theory, which originated in France, and “the white genocide theory”, which comes from the US. Together, the theories are among the most widespread ideologies in far-right spaces, and the primary catalysts of far-right mass violence.