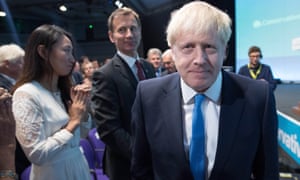 It’s 33C in London, 0.2% of the nation has spoken and a DUDE has lied his way about bananas and condoms to high office

Well, here we are then. Someone who could easily be rejected as a Guess Who character for looking too ridiculous is now to lead the country. A man whose DNA profile is the exact same as a Bernard Manning joke. A man who mentioned the 20 hustings he had taken part in, approximately 30 seconds after Conservative party chairman Brandon Lewis talked of the 16 hustings held.