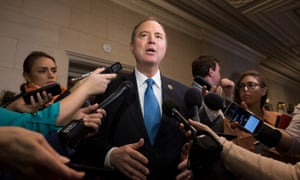 The Trump administration named Trump National Doral, the president’s Miami golf club, as a “finalist” location for next year’s G7 meeting. Trump’s properties have featured prominently during his presidency, despite concerns about conflicts of interest.

The meeting is a gathering of leaders of the world’s most powerful economies. Axios reported the administration is nearing a decision after conducting several site surveys for the upcoming meeting.

The tech companies aren’t ready,” Schiff said. “They don’t have, I think, their policies fully thought out yet. The government isn’t ready. We don’t have the technologies yet to be able to detect more sophisticated fakes.”

And the public, by and large, when you bring up ‘deepfake,’ they don’t know what you’re referring to,” he added. “And so we don’t have much time. It’s eight months until the primaries begin to try to prepare the public, prepare ourselves, determine what other steps need to be taken to protect ourselves from this kind of disinformation.”