Which side are you on?

Goaded on by the president, a crowd at a Donald Trump rally on Wednesday night chanted “send her back! send her back!” in reference to Ilhan Omar, a US congresswoman who arrived almost 30 years ago as a child refugee in the United States.

Trump used the 2020 campaign rally in Greenville, North Carolina, to attack Omar and three other Democratic congresswomen – Alexandria Ocasio-Cortez of New York, Ayana Pressley of Massachusetts and Rashida Tlaib of Michigan – calling them “hate-filled extremists”. The group, which calls itself “the Squad”, has been the focus of racist attacks by the president this week, kickstarted by tweets posted Sunday in which he said the lawmakers, all women of color, should “go back” to other countries.

In other developments, details emerged about a DRC woman who died from Ebola after visiting Uganda and the DRC total climbed to 2,522. 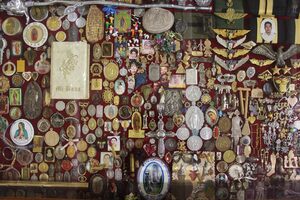 The Virgin of Guadalupe is the most revered and well-known religious icon in Mexico. Each year, millions of parishioners arrive at Basilica of Our Lady of Guadalupe to ask for miracles or thank her for making them happen, often leaving gifts in their wake.

This museum exhibits a small sample of these gifts. Although it may look like a warehouse or a parking lot, do not be fooled by the entrance. Head through the two long corridors that lead to the museum, and you’ll be rewarded with a glimpse of the unique collection sheltered inside.

You’ll first see traditional votive offerings. To give thanks for a miracle, it’s customary to paint the event in question and a phrase of gratitude on wood or “lamina.” There are paintings that give thanks for having survived an accident, a fight, or an illness. Among the unusual gifts of this sort are a Virgin made of bread and a spoon on which a girl nearly choked to death.

You’ll also see votive offerings related to sports, such as trophies or medals. Among them are the replica of the golden boot that the soccer player Hugo Sánchez donated and a boxing medal Kid Azteca won in 1932. There are also political and merit medals, political ribbons, and even a trophy for the best pig breeder of 1962. An additional section of the museum is dedicated to artists who have given gold or platinum records, musical trophies, and a gift from a man who thanked the Virgin for the opportunity to record his first album of norteña music.

The exhibition includes gifts such as hair braids, wooden masks, popotillo paintings (traditional straw paintings), and even a diorama of a woman thanking the Virgin for having saved her son from bombings while he was in the Philippines during World War II. 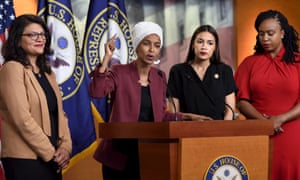 As we’ve seen in the UK, attacking the identity of people of colour can be a route to political success

Pity Donald Trump. Even his racism is the most unsophisticated kind. Every black and brown person knows a “go back to where you came from” racist. For many of us who have never been migrants, to have this muttered at us was the first signal that to be a visible minority means to be forever perceived as an immigrant. And that being perceived as an immigrant is bad.

“Go back” racists are rarely intellectually capable of engaging with the question of whether the destination they deem so suitable for us actually exists. Trump’s latest outburst – in which he said four congresswomen should “go back and help fix the totally broken and crime infested places from which they came”, is a case in point. For the US president to say of Ayanna Pressley, Ilhan Omar, Alexandria Ocasio-Cortez and Rashida Tlaib, “if they’re not happy here, they can leave”, makes no sense because the women in question are Americans. Yet it makes perfect sense because they are not white.

Notable that 187 members of Congress were not willing to stand in solidarity with their colleagues and unequivocally condemn Trump’s targeted racist attacks. https://www.hrw.org/news/2019/07/16/congress-should-condemn-trumps-racist-comments … https://twitter.com/nbcnews/status/1151270229303017472 …