Racist and traitor says anyone who disagrees with him is attacking the America that he has laid open to Russian hacking! 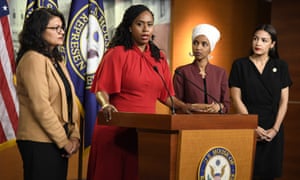 Donald Trump fired another volley in what has become an all-out rhetorical war between the president and four progressive Democratic congresswomen Tuesday morning, accusing them of “spewing some of the most vile, hateful, and disgusting things ever said by a politician in the House or Senate”.

He also accused the Democratic leadership of giving them a “free pass”.