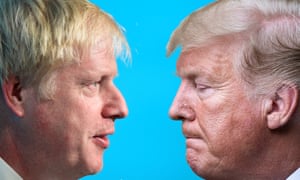 After an explosive leak, the British ambassador resigned. The special relationship has been propelled into a strange and uncertain new era

Donald Trump, president and showman, was staging a military pageant to celebrate the Fourth of July and independence from the British empire. George Washington’s soldiers, he told a rainsoaked crowd in Washington, toppled a statue of King George and melted it into bullets for battle.