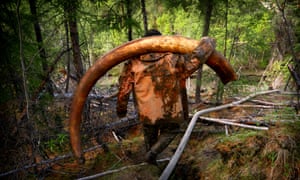 Activists and officials in northern Russia have warned of a “gold rush” for mammoth ivory as prospectors dig up tusks and other woolly mammoth remains that can net a small fortune on the rapacious Chinese market.

Melting permafrost from global heating has made it easier for locals to retrieve the remains of woolly mammoths, which have been extinct for thousands of years, and sell them on to China, where the ivory is fashioned into jewellery, trinkets, knives, and other decorations.