love it been there many times 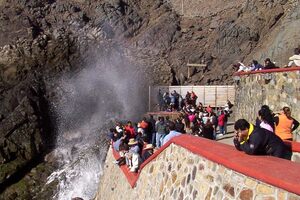 Mexico‘s Punta Banda (Banded Point) is named for the geological strata that dominate the underlying landscape. But it also features yet another geological site of intrigue: one of the most notable blowholes in North America.

The ocean’s waves push air and water through a narrow passage in the rocks. The seawater then flows through a partially submerged chamber before erupting into the air, creating one of Earth’s largest marine geysers.

Expect to get wet! Waves crash into the ocean cliff as frequently as you would imagine. Even on a calm day, this can blast a ton of water 100 feet or more above the sea. The geyser height relates to the tide level and the size of waves, so expect a better show during rough seas at high tide.

Old lore has it that a whale became wedged in the rocky point and blew water to attract its pod’s attention. Eventually, the whale turned to stone, never to be free again.