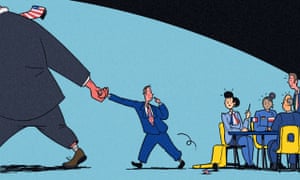 The chief of Britain’s Foreign Office does nothing casually. He is a past master at saying nothing unintended in public. So when the Foreign Office permanent secretary, Simon McDonald, went before MPs this lunchtime after the devastating resignation of Britain’s Washington ambassador, Kim Darroch, his incisive directness was a revelation. It was the most eloquent evidence possible that the Darroch affair is not just a diplomatic storm but an existential challenge to Britain’s entire foreign policy.

What precedent was there, the foreign affairs committee chair Tom Tugendhat asked McDonald straight off, for the head of state of a friendly government to do what Donald Trump has done this week and make it impossible for Britain’s senior representative in that country to do his job? McDonald’s answer was monosyllabic, crisp and explosive. “None,” he said.