How not to make friends and influence people 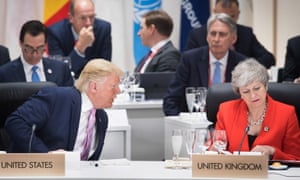 Theresa May is facing a full-blown diplomatic standoff with the US after Donald Trump condemned Britain’s “stupid” Washington ambassador over leaked memos critical of the White House, as Downing Street insisted Sir Kim Darroch had its full support.

The escalating crisis began after a Sunday newspaper printed extracts of confidential memos in which Darroch labelled Trump’s administration “inept” and “dysfunctional”. The US president announced on Monday he would no longer deal with the ambassador.