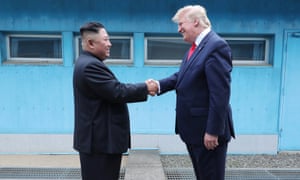 North Korea has complained after the United States sent a letter urging countries to send back workers from the Stalinist state as President Donald Trump was inviting Kim Jong-un to hold talks.

The North Korean mission to the United Nations said on Wednesday that the letter sent to all UN member-states showed that Washington was “practically more and more hell-bent on the hostile acts” against Pyongyang, even though it is seeking dialogue.