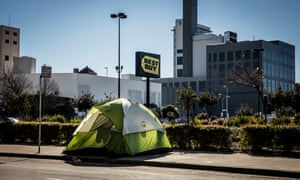 Donald Trump said he might “intercede” to “clean up” homelessness in San Francisco and Los Angeles, noting that world leaders “can’t be looking at that”.

In a conversation with the Fox News host Tucker Carlson broadcast Monday evening, Trump called the situation “disgraceful” and implied that it was making police officers sick.