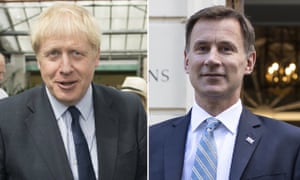 Rolling coverage of the day’s political developments as they happen, including the latest from the Tory leadership contest

After Jeremy Hunt said that German chancellor Angela Merkel had indicated the EU would look at a sensible new proposal put forward by the new prime minister (20:02), the foreign secretary asked in a tweet who Conservative members trusted to renegotiate a better Brexit deal.

The question is who do you trust to renegotiate a better Brexit deal that can get through Parliament? #HastobeHunt #BattleforNumber10 pic.twitter.com/DdQ1exDWvZ

Hunt on proroguing parliament. Clearly rules it out, says public wouldn’t accept it. Dividing line with Johnson, who has kept it on the table, though says he hopes MPs will do responsible thing (problems is mass majority of MPs think responsible thing to do is block No Deal)

I was dreading you asking something like that. Well I think in this campaign, the best jokes I’ve probably seen have been on the internet. For the time time in my life actually, the internet has been quite kind to me .. because they think I’m the underdog. They actually ran a campaign to tell Jeremy what his slogan should be for this leadership campaign. So we had #takeapuntonhunt, #jezzasthebezza, and then the one you’re really not going to try and say is #huntymchuntface.

Thanks Ben. If I become PM I want you back in the House of Commons where you belong! https://t.co/9X8760HkSn

Here is the full story on Boris Johnson’s phone-in from Amy Walker.