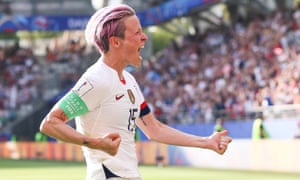 The funny, eloquent, insightful midfielder is the latest in a long line of USA women’s players who have been unafraid to challenge the establishment

As the Star-Spangled Banner rang out on Tuesday in Reims before the USA’s quarter-final tie with Spain, the TV cameras panned over the starting eleven, hands on hearts, singing in unison. And then there was Megan Rapinoe, silent and steely, standing because she’s been told she has no other choice, a proud American with a point to prove.

In the gritty grind of a game that followed she was not at her best, yet she scored both USA’s goals from the penalty spot, testament to both her talent and her composure. When things go wrong, you want Rapinoe on your team. And when things go right, she’s often the driving force, the source of some of the sweetest crosses and most accurate corners ever witnessed in the sport.