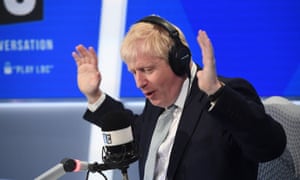 You can see why Boris Johnson’s carers have chosen to mothball him in recent weeks. His decline has been almost total. Johnson never did much care for the past or the future. Every day has always been a tabula rasa, one on which he was free to reinvent himself as he pleased without being bound by any commitments he may have made. Now though, he appears to barely have a present. Unable even to maintain the most basic rules of conversation, his words are just a scattergun of free association.

Nick Ferrari began Johnson’s LBC radio interview with a few easy rapid-fire yes and no questions as if to establish a benchmark for the lie detector. It proved hard work as Johnson was such a shambles he could barely even confirm his name. Was he a coward? That should have been a no brainer. That’s the one thing on which everyone – even his friends – agree. Johnson merely looked confused. The silence was interpreted as a yes on the polygraph.