Update six and one-half years later. The original article below was posted on Nov. 18, 2012.
Censored News came under attack by trolls who wanted to discredit the facts this weekend in June of 2019, so we have reposted it, with our current Facebook comment added:
“Aleut Concentration Camps — It took a long time to find this link, which Google buried, of As tensions between the US and Iran escalate, it appears Washington has backed down and Tehran is in control. The Iranian regime is using an unconventional military strategy to steer the Trump administration.

Mr. Bartholomew, a producer, arranger, composer, trumpet player and bandleader, was best known for his long collaboration with Fats Domino. 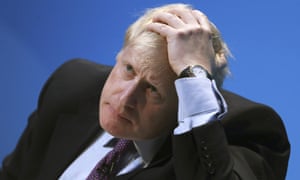 The would-be prime minister says Brexit just requires brio and confidence. He turned politics into a game of personality

Let’s begin with the straightforward part: any incident in which a woman is heard screaming in her home, and shouting “Get off me!” at a man, instantly becomes a matter not only of public interest but public responsibility.

WARNING: This post contains references to gruesome human rights violations. It is not for everyone.

900 people total, or or more than seven times the 125-person capacity of the El Paso Del Norte immigration processing center.

If it weren’t for the white boxes shielding the faces of dozens of men and women stuffed into the overcrowded cell, it would be difficult to count the people in the photograph, since their overlapping limbs make it impossible to see where one body ends and another begins.

Standing room only cells, where people are held for weeks. Limited access to showers and clean clothes, resulting in those held wearing soiled clothing “for days or weeks.”

People standing on toilets just to find air to breathe. 24 deaths while in ICE custody.

The United States government is operating concentration camps. And we must act.

Memos surfaced by journalist Ken Klippenstein revealed that Immigration and Customs Enforcement’s failure to provide medical care was responsible for suicides and other deaths of detainees. These followed another report that showed that thousands of detainees are being brutally held in isolation cells just for being transgender or mentally ill.

Two weeks ago, the Trump administration cut funding for classes, recreation and legal aid at detention centers holding minors — which were likened to “summer camps” by a senior ICE official last year. And there was the revelation that months after being torn from their parents’ arms, 37 children were locked in vans for up to 39 hours in the parking lot of a detention center outside Port Isabel, Texas. In the last year, at least seven migrant children have died in federal custody.

It’s certainly been helpful for the Trump Administration that nobody has called them concentration camps until this week, when Rep. Alexandria Ocasio-Cortez came under great fire for doing so.

It may well be a testament to the media machine that is the Trump administration. Look away! He wore an ill-fitting tuxedo to meet the Queen! Look away! He won’t acknowledge that the Central Park Five are exonerated! Look away! He fired pollsters for giving him numbers that he didn’t like!

It’s helpful to the President that the media covers these human rights abuses intermittently instead of as what they actually are: proof of a racist administration, unchecked by the law. It’s helpful that there’s so much else to look at right now. But more than anything else, it’s helpful that the places where these people are being tortured and left to die are hidden. They’re locked away from the eyes of journalists and concerned members of the public. They’re misleadingly named.

That’s what a concentration camp is. And the immediate outrage to AOC calling them that is the right response. Hearing that the government is running concentration camps is something one should feel scrupulous towards. A concentration camp isn’t the same as a death camp. We don’t have those yet. But when Hitler ran his, they started as the former, extending to the latter.

Hannah Arendt, imprisoned by the Gestapo and interned in a French camp, wrote about the levels of concentration camps. Extermination camps were the most extreme; others were just about getting “undesirable elements … out of the way.” All had one thing in common: “The human masses sealed off in them are treated as if they no longer existed, as if what happened to them were no longer of interest to anybody, as if they were already dead.”

Is that not what we were doing?

I hesitate to speak for my own ancestry, for my family members killed at Neuengamme camp along with more than 43,000 others. But I can’t hesitate long enough to sway my thinking away from confirming what AOC already said.

It’s easy to think of the Holocaust only in terms of the final outcome. But there was a beginning.

Mass detention isn’t new. But this president has made it a centerpiece of his rhetoric and his agenda. He’s perfected the extreme language that dehumanizes immigrants. At a rally in Florida last month, Trump was bemoaning migrants’ legal protections when someone in the audience suggested they should be shot. The president laughed and made a joke.

Do you see it? 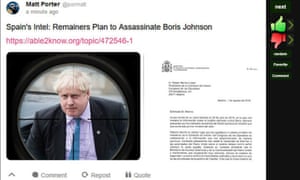 Suspected Russian spies floated a series of fake stories on social media including a claim that Remainers were planning to kill Boris Johnson and that the novichok used in the Salisbury attack came from the Real IRA, a new study shows.

The operation was done to provoke tensions between western countries. It was persistent, sophisticated and well-resourced, and involved fake accounts on more than 30 platforms and nine languages, over five years, the study says.