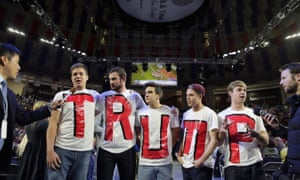 The politicisation of evangelicals is dangerous – especially when they’re supporting a loveless, graceless amoralism

In the UK, the United States president is dismissed or condemned from almost all quarters, and most of us struggle to get our heads around the idea that millions of people voted for Donald Trump. One significant group of these voters were white evangelical Christians. According to the exit polls from the 2016 US election, white “evangelical Christians” voted for Donald Trump over Hillary Clinton by 81% to 16%.

It has not been unusual for presidential candidates to court the so-called “evangelical Christian vote” in recent history. If you vote for a president, it doesn’t necessarily mean you support everything they stand for. I recognise that: the 81% represents a whole host of motivations and degrees of support rather than a united mass gathering under Trump’s banner. But it’s still a big number.