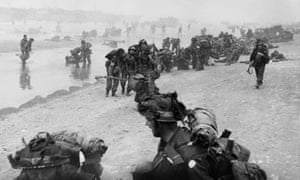 The D-day commemorations have never felt so uneasy. Trump and Brexit are tearing apart the bonds forged after 1945

They are saying that Thursday – the 75th anniversary – will be the last of the international D-day commemorations in which the veterans of 1944 participate. For obvious reasons that may well be so. The surviving soldiers who fought their way up the beaches of Normandy are in their 90s now, so it seems poignantly unlikely that more than a handful will return in 2024.

But there is a more political reason why this week could be the start of a less unified approach to marking the liberation of Europe at the end of the war against Hitler’s Germany. The reason is that Donald Trump’s US and Brexit Britain, though both still immeasurably and justifiably proud of the roles their predecessors played in this epic climax of the war in the west, are each in their own way turning their backs upon the European order that the invasion of 6 June 1944 made possible.