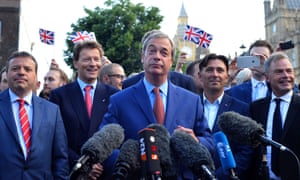 Nigel Farage has been given 24 hours by the European parliament to explain in person his failure to declare lavish expenses funded by Arron Banks, an insurance tycoon under investigation by the UK’s National Crime Agency.

The summons came just two hours before the Brexit party leader was spotted arriving at the US ambassador’s residence in London for a meeting with Donald Trump during the US president’s state visit to the UK.