Didn’t think he could ever be more stupid than was thought? ROTFLMAO 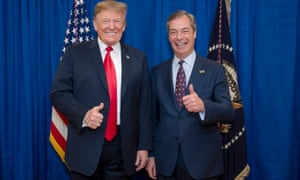 US president makes second intervention in British politics, saying UK should ‘walk away’

Donald Trump has called on Britain to leave the European Union without a deal if Brussels refuses to meet its demands, as he urged the government to send Nigel Farage into the negotiations.

In his second extraordinary intervention into British politics ahead of this week’s state visit, the US president suggested the UK should “walk away” from talks and refuse to pay the £39bn divorce bill if its requests were not met.