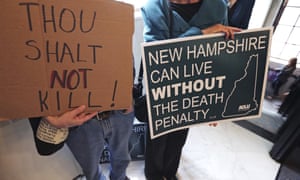 New Hampshire, which hasn’t executed anyone in 80 years and has only one inmate on death row, has became the latest US state to abolish the death penalty when the state senate voted to override the governor’s veto.

“Now it’s up to us to stop this practice that is archaic, costly, discriminatory and final,” said New Hampshire state senator Melanie Levesque.