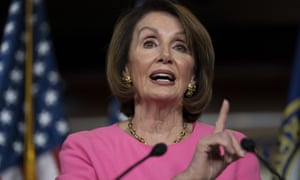 Upon taking control of Congress in 2006, House Democratic leader Nancy Pelosi declared that impeachment of then-President George W Bush was “off the table.”

Her remarks dismayed many critics of Bush, who continued to press Pelosi and other Democratic leaders to pursue impeachment against the Republican president. They pointed to the Bush administration’s warrantless surveillance, the illegal war in Iraq, and the use of torture.