In Japan for Memorial Day? Does Trump even care or know how many Americans Japan killed from 1941-1945? 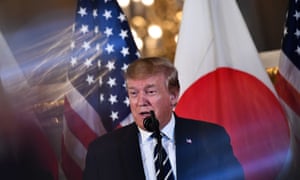 Donald Trump kicked off his state visit to Japan on Saturday by urging Japanese business leaders to increase investment in the US – but he also complained about his own central bank and knocked his hosts for having a “substantial edge” on trade, which he said negotiators were trying to even out.

Related: ‘Queen of shade’: five times Nancy Pelosi got the better of Trump