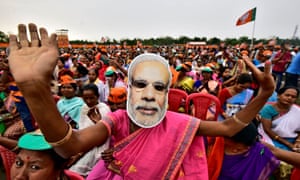 If the Indian prime minister is returned to office, his sectarian politics will make bigotry the defining ideal of the republic

Indian elections are a marvel to behold. The rules stipulate that no citizen should have to travel more than 2km to vote. So the state goes to the voters. Carrying oxygen tanks, election officials scaled the Himalayas to erect a voting booth in a village in Ladakh, 4,500 metres above sea level. In western India, a polling station was set up for the lone human inhabitant of a wildlife sanctuary. In eastern India, officials trekked for an entire day to reach the sole registered voter, an elderly woman, in a remote village. By the time voting closed on Sunday, some 600 million people had cast their ballots, 10 million of them for the first time.

The refrain from Hindu voters has been identical: Modi has failed us, yes, but he’s at least put Muslims in their place