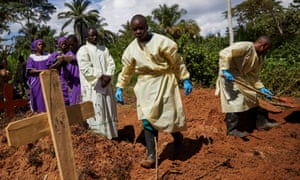 More than 1,600 people infected in North Kivu province since outbreak began in August

An Ebola epidemic in a conflict-riven region of Democratic Republic of Congo is out of control and could become as serious as the outbreak that devastated three countries in west Africa between 2013 and 2016, experts and aid chiefs have warned.

New cases over the past month have increased at the fastest rate since the outbreak began last year, as aid agencies struggle to enact a public health response in areas that have suffered decades of neglect and conflict, with incredibly fragile health systems and regular outbreaks of deadly violence involving armed groups.