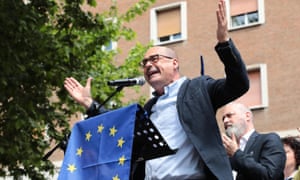 Nicola Zingaretti, the new leader of Italy’s centre-left Democratic Party (PD), said European leftwing and liberal forces must unite to protect the EU against those who want to “take a pickaxe” to it.

Zingaretti, 53, has endeavoured to re-energise his party, which governed Italy until June last year, before European parliamentary elections later in May in order to take on Italy’s rightwing populist government with a broad list of leftwing candidates.