Wrong side of history times two – fascist and stupid! 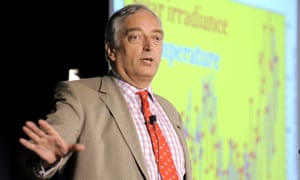 Germany’s rightwing populists are embracing climate change denial as the latest topic with which to boost their electoral support, teaming up with scientists who claim hysteria is driving the global warming debate and ridiculing the Swedish climate activist Greta Thunberg as “mentally challenged” and a fraud.

The Alternative für Deutschland party (AfD) is expected to launch its biggest attack yet on mainstream climate science at a symposium in parliament on Tuesday supported by a prominent climate change denial body linked by researchers to prominent conservative groups in the US.

picture this – how high can he pile it on? 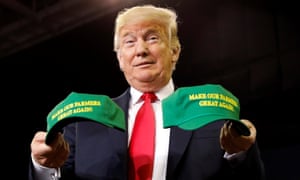 Donald Trump continued to defend his trade war with China on Tuesday, claiming “great patriot farmers” in the US would benefit from tariff increases that triggered sell-offs in stock markets across the world. 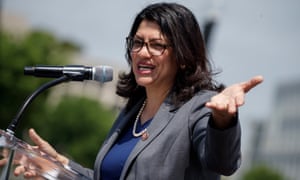 Democrats in Congress have rallied behind Rashida Tlaib after Republicans, citing her recent comments about Israel and the Holocaust, accused the congresswoman of being an antisemite.

A police officer shot and killed an unarmed Black woman whose last words were “I’m pregnant!” following a physical confrontation in an apartment complex parking lot in suburban Houston Monday night. The woman and the officer were not immediately identified, but a bystander managed to capture the fatal episode on camera in the city of Baytown.

“Baytown Police Lt. Steve Dorris said an officer on patrol saw a 45-year-old woman the officer had had prior encounters with,” CBS News reported. “He knew the woman had outstanding warrants, so he approached her to arrest her.”

That encounter turned into a struggle between the two, with the woman falling to the ground before the officer used his Taser on her. When she got up and pushed the officer away, the cop pulled out his gun and shot her multiple times at very close range.

The video of the shooting went viral overnight and spread quickly across social media. It was the latest instance of an unarmed Black person being killed when standard police training, in theory, should have allowed the officer to de-escalate the situation without resorting to lethal force, at least. At best, the officer could have called for backup since his life did not appear to be in any kind of imminent danger.

Baytown police said they want to speak with the person who recorded the shooting and said it was “unfortunate” that person decided to post the footage to social media.

“It’s extremely disrespectful for everybody involved,” Dorris told CBS News. “But that’s the day and age we live in with social media.”

Of course, cellphone video cameras and social media have become the great equalizer surrounding police shootings that many times result in conflicting accounts from law enforcement and shooting victims. The footage can many times offer a truthful and accurate snapshot of the incident in question and serve as critical evidence in the event the officer is charged, which is a rarity.

A previously unaffected health zone in North Kivu province reported its first case today, South Korea announced a cash donation for the response, and a group warned of a security clash-related rise in displaced people.

A police officer in Baytown, Texas, fatally shot and killed a black woman while attempting to arrest her at her apartment complex on Monday night.

Most people know that the world is facing an extinction crisis. Overfishing, unchecked energy exploration, and human sprawl has put 16,000 species on the Endangered Species List, with many more waiting to get on.

Evidence suggests that once on the list, the chances of ever getting off are slim. But does that have to be that case? It turns out that many, if not most, of the organism on that list are highly savable, and at a hell of a bargain.

As I wrote in a recent story for Newsweek, More than half of the endangered species – and where the list has seen the most growth in recent years – are in the plant kingdom. Most of these species would be relatively cheap to raise in greenhouses and replant in the wild yet the budgets to do so is laughably small.

Take Amaranthus brownii, an obscure Hawaiian herb that’s been on the list since 1979 and is found on a single quarter-square-island, called Nihoa. It’s never been grown in captivity but conceivably could be, with a little effort. Congress annually appropriates the oddly-specific sum of $135,884, but only paid out two percent of that – a little under $3,000. That wouldn’t cover the trip to get to Nihoa. And believe it or not, A. brownii is lucky to get that much. Plenty of species that are due hundreds of thousands every year never see a dime.

So what is the solution? Plenty of environmentalists would say, “More money for the US Fish and Wildlife Service!” And certainly that would work, were it not for the fact that there’s no political upside to it. If someone came to you outside the supermarket with a tin cup and said “Give $2 to save a rare herb?” would you really reach into your wallet? But what if, instead, someone came up to you and offered $50,000 for the same thing?

Why are we asking citizens to pay for conservation when it would be so much more effective and efficient to pay them to do it themselves?

After the Dust Bowl ravaged America’s heartland, we didn’t set up a National Anti-Erosion Department, we paid farmers to do it themselves – and continue to do it every year under the Farm Bill. Now, criticize the Farm Bill all you want (and certainly I could all day) but it’s popular with people on the ground. And that is the Endangered Species Act’s biggest problem – local people hate it. Some will even search their land for a critter about to make the list and eradicate it. The organisms most at risk in America are found in tiny areas, and thus their fates are in a select group of very hostile hands. So what if we just paid people to preserve the animals themselves?

This week the Supreme Court released a ruling on the dusky gopher frog, essentially saying that the government should designate habitat for it if the critter isn’t actually there. Essentially, our government went to landowners and said, “Your forest is endangered species habitat, even though there are no animals there.” It’s almost as if they wanted to get sued in federal court. Instead, what if they said, “Hey, this is good dusky gopher frog habitat, we’ll pay you a buck for every frog you can maintain here. Same goes for your neighbors.”

No lawsuit, no loggers griping about stupid frogs, no fodder for politicians to score political points. Just a bunch of landowners rushing to Google to search the phrase “frog husbandry.”

$$$ Talks! WTF!! Hidden-camera footage of New England Patriots owner Robert Kraft at a Florida massage parlor cannot be used as evidence in his trial on charges of soliciting prostitution, a judge ruled on Monday in a victory for the billionaire.