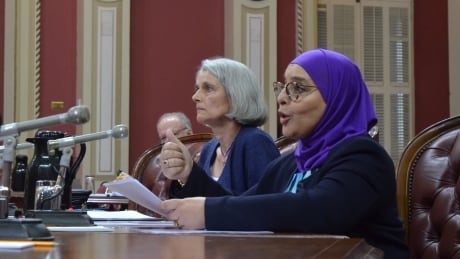 It wasn’t until late on the second day of hearings into Quebec’s secularism bill that lawmakers heard from someone who wears one of the religious symbols targeted by the legislation.

And who shall we believe as Trumpster prepares to lose thousands of jobs for Americans on a whim and bad economics!?! President Donald Trump said on Wednesday that China “broke the deal” in trade talks with Washington and would face stiff tariffs if no agreement is reached.

Response activities have been curbed owing to violence for 4 straight days, as deaths hit 1,069.

UN alarmed over ‘alien policing procedures’ that systematically deny food to asylum seekers in holding areas on the Serbian border.

The prime minister pulls out all the stops in his failed attempt at preventing the annual Israeli-Palestinian Memorial Day ceremony from taking place.

Prime Minister Netanyahu appears to have lied to Israel’s highest court this week in an attempt to shut down and delegitimize one of Israel-Palestine’s only successful fora for shattering the exclusive nature of national mourning.

Israeli leaders have consistently criticized the ceremony, organized by Combatants for Peace and the Parents Circle Family Forum, for what they say is commemorating Palestinian terrorists. For the second year in a row, Israel’s Defense Ministry, headed by Defense Minister Benjamin Netanyahu, denied entry permits to 176 West Bank Palestinians from bereaved families who hoped to participate in the ceremony.

According to Netanyahu, the bereaved families pose a security threat.

When the organizers requested entry permits for Palestinians, the Defense Ministry initially denied the request due to the closure on the occupied territories on Memorial Day. The Israeli army places the West Bank under closure on Jewish and Israeli national holidays by shutting down checkpoints to Palestinian traffic.

Combatants for Peace and PCFF appealed the decision to the High Court. In the state’s response, Netanyahu and State Attorney Avichai Mandelblit argued that the decision to deny entry to Palestinian participants stemmed from security concerns.

The High Court didn’t buy it and overturned the decision. In his ruling, Justice Yitzhak Amit slammed Netanyahu for claiming that the decision to deny entry came in light of the violence in Israel’s south. Yet Amit noted that the Defense Ministry made its decision prior to the latest round of fighting, and that there was no closure on the West Bank during that time. The court then ordered the state to allow 100 of the Palestinians to attend the ceremony.

Netanyahu took to social media to criticize the ruling: “The High Court’s decision is mistaken and disappointing. There should not be a ceremony that equates the blood of our sons to the blood of terrorists. That is why I refused to allow entry to the ceremony participants, and I believe the High Court should not have intervened in my decision.”

Netanyahu’s admission is astounding. As one Israeli blogger who goes by the pseudonym John Brown pointed out, the prime minister deliberately deceived the High Court, claiming after the fact that he denied those 176 Palestinians — who wanted to travel to Tel Aviv to commemorate the deaths of their loved ones alongside Israelis who sought to do the same — should be denied on moral grounds, not security considerations.

Netanyahu is no fool. He knew that, like last year when then-Defense Minister Avigdor Liberman tried to do the same, the High Court was likely to overturn the decision. He knew that an alternative Memorial Day event poses no threat to the State of Israel or his decade-long reign.

His goal, then, is symbolic: to portray any semblance of a Jewish-Palestinian alliance as an act of subversion and treason. To turn a ceremony that, for one night, would allow Israelis and Palestinians to share grief, reconcile, and imagine a different world, into a display of disrespect for Israeli soldiers and their families. The saddest part is that it seems to be working.

The post Netanyahu wants you to think Israeli-Palestinian mourning is seditious appeared first on +972 Magazine.

An Israeli court has released to house arrest an extremist Jewish teenage settler charged with manslaughter over throwing a rock that killed a Palestinian mother in the northern part of the occupied West Bank last October.

On Tuesday, the court in Jerusalem passed the ruling on the 16-year-old suspect, whose identity remains under gag order with other specific details of the investigation.

He will be required to wear an electronic ankle bracelet; be under the 24/7 supervision of two adult family guardians; and have no contact whatsoever with non-family members.

On January 24, Israeli prosecutors charged the teenager with manslaughter, stating that he carried out the attack “under aggravated circumstances,” terming his “intentional vandalism of a vehicle as an act of terror.”

The attack was “based out of an ideological motive of racism and hostility toward Arabs everywhere,” the indictment stated.

“The defendant hurled the rock with great force toward the front windshield of the vehicle with the objective of hurting the passengers and with indifference to the possibility of causing their death,” it pointed out.

The teenager has been in a juvenile detention facility since December 30 last year.

Aisha Muhammad Talal al-Rabi, 47, a mother of eight children and a local resident of Bidya, located 32 kilometers southwest of Nablus, was killed and her husband suffered injuries after Israeli settlers hurled rocks at their vehicle near the Za’tarah checkpoint in Nablus on October 12 last year. The stone weighed about two kilograms, according to prosecutors.

Israeli authorities arrested five Israeli settlers, who were held on suspicion of involvement in the killing of Aisha, on December 30, 2018. Four of them were later released to house arrest.

Price tag attacks are acts of vandalism and violence against Palestinians and their property as well as Muslim holy sites by Israeli settlers.

More than half a million Israelis live in over 120 settlements built since Israel’s occupation of the Palestinian territories of the West Bank in 1967. This is while much of the international community considers the settler units illegal and subject to the Geneva Conventions, which forbid construction on occupied land.

The California Legislature joins three other states in passing bills that would deny President Donald Trump access to their primary ballots unless he discloses his tax returns for recent years. About a dozen more state legislatures will be debating similar measures this week.

The majority of the California Senate voted in favor of a bill that requires presidential candidates to disclose the last five years of their tax returns. Although the bill makes no specific reference to the President, bill co-author Mike McGuire said “we believe that President Trump, if he truly doesn’t have anything to hide, should step up and release his tax returns” before running for reelection in 2020.

“Voters deserve to know, for example, if the President is putting America’s security at risk through his tangled web of business dealings with corporate interests and his dealings with foreign governments and foreign banks,” added McGuire.

The bill has now been sent to Governor Gavin Newsom’s desk, who could sign it into law. However, Newsom spokesman Jesse Melgar said the Governor would evaluate it on its own merits.

Former California Governor Jerry Brown vetoed a similar bill two years ago, but Newsom – even back when he was running – expressed an interest in Trump releasing his tax returns.

Although California has a large electoral weight on its own, should the other states follow suit it would be impossible for the President to run for reelection unless he releases his tax filings to the IRS.

Illinois, Washington and Nueva York have already passed similar measures, and at least 13 other states confirmed this week that they are preparing similar bills to bring to a vote.

At the federal level, House Financial Services Committee Chair Maxine Waters is insisting that the President disclose his tax returns for the past seven years, stating that Trump is the only president in American history that has refused to release his tax returns.

In response, Trump has threatened to sue two different banks if they agree to provide his tax return information.

The Financial Services Committee is pressuring Deutsche Bank and Capital One to turn over the President’s tax returns. Trump responded by threatening to sue the 2 banks if they agree to the Committee’s request.

The returns would inform how much Trump paid in taxes, how much he claimed in deductions, and the reasons why both the president – a real estate mogul – and the Trump Foundation have paid no taxes for several years.

Once Trump reads this he will pardon them or back track for show but not results.

News
The U.S. government sued nearly two dozen of West Virginia Gov. Jim Justice’s coal companies Tuesday to get them to pay about $4.8 million in unpaid mine safety fines.