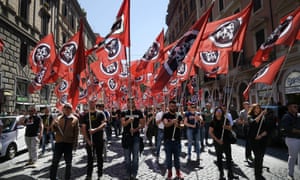 Auschwitz-Birkenau state museum has urged Turin authorities to intervene amid mounting controversy over the participation at the city’s international book fair of a publisher said to have close links with the Italian neo-fascist party CasaPound.

The museum has been participating in the book fair, which gets underway on Thursday, since 2015 but says it will pull out if the Altaforte publishing company remains among the exhibitors.