John Kelly, the former White House chief of staff who advocated for separating families at the border, has joined the board of Caliburn International, a parent company to the organization operating the largest housing facility for migrant children in the United States.

Hostility toward health workers continued to hamper efforts to contain the second-deadliest outbreak of the virus.

What does the hijab say about national security? It would make more sense to ban backpacks, the kind the bombers used. It was the backpack that raised the suspicion of Ramesh Raju who stopped the bomber from entering the Zion church in Batticaloa, saved many lives and lost his own. 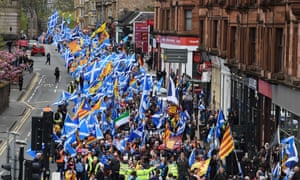 Tens of thousands of people are expected to march in Glasgow on Saturday afternoon in the largest show of support for Scottish independence since Nicola Sturgeon said she would introduce legislation to hold a second independence referendum.

The All Under One Banner event, which will be led by a single flag-bearer and a pipe band, will leave Kelvingrove Park at 1.30pm, following a route west to east through the city centre, before ending with a rally at Glasgow Green.

Dr. Wen immigrated to the U.S. at 7, graduated college at 18, became a Rhodes scholar and is now at the front lines of the fight over women’s health care rights.