Multiple extremist figures, including Infowars’ Alex Jones and Nation of Islam leader Louis Farrakhan, have been banned from Facebook and Instagram. The social media giant has tried to cut down on extremist content.

By aligning himself with nationalist leaders who foster white supremacy, Netanyahu has abandoned world Jewry in a bid to bolster his own nationalist machinations.

For some years now, Israeli Prime Minister Benjamin Netanyahu has been forming close diplomatic relations with far-right nationalist world leaders. This alignment might promote Netanyahu’s plan to strengthen Jewish nationalism in Israel, but it concomitantly weakens diaspora Jews and makes them more vulnerable to anti-Semitism and hate crimes in their own countries.

Over the last five decades, anti-Semitism was in decline, particularly in the United States. Jews in the United States occupy powerful political positions, are key figures in the worlds of business and entertainment, are well integrated into American society. They are American in every sense of the word. However, as the horrific act of terror in a San Diego synagogue painfully reminded us last week, white nationalists and white supremacists have never accepted Jews as equals — or even as white.

White supremacy definitely still exists. Destroying 500 years of institutional structures and the internalization of privileged status is not that easy. Even the election of President Obama was in many ways merely a facade of progressiveness — a false hope. Research has shown that racism against black Americans actually increased during President Obama’s time in office. Furthermore, President Trump’s promise to “make America great again” gave white nationalists and white supremacists a nod to raise their heads and act.

The Anti-Defamation League reported that in the past year, a total of 1,879 incidents of harassment, vandalism, and physical assault were committed against Jews in the United States. This represents the third-highest number of reported incidents since the 1970s.

Netanyahu’s policies and vision for Israel, alongside his narcissism and ambition to stay in power forever, have create divisions not only inside Israeli society but also between Israel and American Jews. Netanyahu’s idea of Israel is not a Jewish nation with equal rights for all, but as an Israeli-Jewish nation — abandoning both non-Jewish Israelis and non-Israeli Jews.

Further, Netanyahu’s my-way-or-the-highway worldview turns American Jews who oppose the occupation or who do not fully support Israeli policies into traitors. To replace the real or anticipated loss of their support, he has looked for allies elsewhere — ones who are comfortable with Israel’s own nationalist underpinnings.

The common denominator between all these leaders — Hungary’s Viktor Orban, Brazil’s Jair Bolsonaro, and Donald Trump — is the often-insinuated but at times overt support of white national supremacy. They endorse and employ hate rhetoric, use racist terms, and undermine the rights of LGBTQ people and women. Their true goal is the promotion of the “old order” — demoting the position of and discriminating against minorities, a category that inescapably and invariably includes Jews.

The national supremacy these leaders promote in their countries is in many ways indistinguishable from Netanyahu’s agenda for Israel. Netanyahu is an intelligent man; every move he makes is calculated wisely and strategically. By aligning himself with far-right nationalist leaders who foster white supremacy, anti-Semitism, and the violence they produce, he has decided to abandon world Jewry in exchange for diplomatic support and the legitimization of his own nationalist machinations.

Israel has become a Jewish state that cares only for Jewish-Israeli citizens, breaking its commitment to protect diaspora Jews, not to mention its obligations to the non-Jews living under Israeli rule.

10 cosponsors are on those committees.

stupid is as stupid does and endangers the whole to serve fake “beliefs” An effort to end all non-medical exemptions for childhood vaccinations in Maine was in limbo on Thursday after the state Senate voted to amend it to allow parents to keep opting out on religious grounds.

Too many Republicans no longer believe that the Constitution is more important than the party. 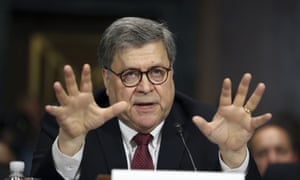 There was a point during the Senate’s alternate grilling and chilling with Attorney General Bill Barr when you could hear the ghost of Richard Nixon crying.

Nixon took one final helicopter flight from the White House a generation too soon. He shuffled off this mortal coil a decade too early for redemption. 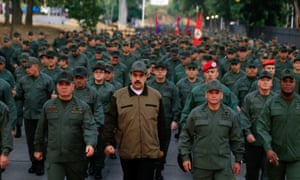 After a botched attempt to overthrow him, Maduro holds ‘march to reaffirm the absolute loyalty of the armed forces’

Nicolás Maduro has thanked Venezuela’s military for resisting what he branded a treacherous “imperial” plot to topple him this week by sparking a conflict that would justify foreign military intervention.

“Loyalty is a value that you either have or you don’t … I know you will not fail the homeland,” Maduro told troops during an early-morning parade in Caracas that was broadcast on state television.

Harris was the only Democrat who seemed to stump Barr and throw him off his game, and by his game, I mean lying to protect the president. Barr literally moved his lying game to Matrix levels where he basically argued, rejected or appeared to misread blatant statements that could’ve been concluded by a normal nonpartisan person as obstruction of justice. But Mr. Flintstone is clinging firmly to President Trump’s fat-ass tie, so until all of these people are impeached, we will have to live with them being shamed.

So far as I can tell Maduro was re-elected in an election…not this Guido dude….so as far as legit goes Maduro is it and anything else is just the US attempting yet another regime change in the name of democracy (which has nothing to do with the result just sounds good in the media)