Under questioning by Democratic Senator Kamala Harris, a 2020 presidential candidate, Barr acknowledged he did not review the investigation’s underlying evidence before deciding to clear Trump of obstruction.

No wonder gunmen are coming for us.

We have a system in place for our government to uncover evidence against a sitting president. And it’s working. 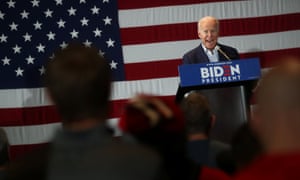 As times have changed, Biden’s expressed retrospective misgivings about some of his earlier actions and stances. That’s not enough

After much huffing and puffing, Joe Biden has officially entered the race for 2020. In his announcement, he indicated his intention to hit the ground running immediately in early primary states, especially South Carolina.

We were struck by the emphasis on South Carolina. The state’s Democratic presidential primary has taken on iconic status at least since 2008, when candidate Barack Obama’s victory there, on the heels of a victory in the Iowa caucuses three weeks earlier, propelled him toward the nomination. In 2016, South Carolina stood out among the commentariat as the crucial test of a candidates’ ability to appeal to African American voters, and Hillary Clinton’s overwhelming win fueled the contention that she was a much stronger candidate than Senator Bernie Sanders among African Americans and other voters of color.

Stephen Moore decided to share a little joke. “There’s that great cartoon going along that [shows] the New York Times headline ‘First Thing Donald Trump Does As President Is Kick a Black Family Out of Public Housing,’ and it has Obama leaving the White House,” Moore said, eliciting a chorus of groans and laughter from the audience. “I mean, I just love that one!” Outstream Video   00:00 00:00 Moore is now one of Trump’s nominees for the Federal Reserve Board. On Tuesday, PBS’s Margaret Hoover gave Moore an opportunity to address the racist joke, and Moore’s attempts at clarity quickly turned into a sputtering mess: