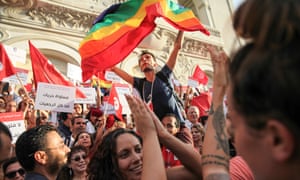 One of the Arab world’s most visible advocacy groups defending the rights of lesbian, gay, bisexual, transgender and intersex people is facing closure following legal threats by the government.

Association Shams has been officially operating in Tunisia since 2015, helping the country’s LGBT community repeal article 230 of its penal code, a French colonial law, which criminalises homosexuality with up to three years in jail.