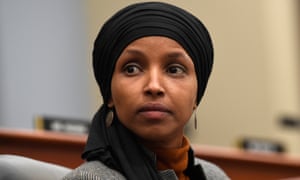 Site took no action to remove posts by Patrick Carlineo alluding to violence against Muslims and US officials, until Guardian review

Facebook allowed a man charged with threatening to kill congresswoman Ilhan Omar to post violent and racist content for years, and took no action to remove his posts when he was arrested.

Patrick Carlineo, of upstate New York, posted several entries to his Facebook page alluding to violence against Muslims and US officials including former president Barack Obama, a Guardian review found.