The US president had published a video intertwining images of a speech by Ilhan Omar and the 9/11 attacks. Lawmakers have condemned Donald Trump, saying the “dangerous video” risked the Muslim representative’s safety.

The tabloid featured the burning World Trade Center towers and a partial quote from Representative Ilhan Omar on a front page that protesters fear could incite violence against Muslims.

Representative Ilhan Omar is the latest target in a trend of conservatives attacking women of color. 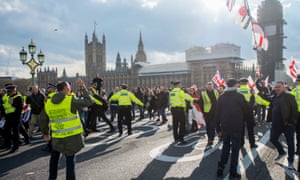 As the political temperature soars, those who seek to govern Britain have a responsibility to speak with care

In what moral universe is the statement “I wouldn’t even rape you” categorised as “satire”? For this is how – in an interview on Sunday with the BBC’s Andrew Marr – Gerard Batten, Ukip’s leader, described a tweet sent to the Labour MP Jess Phillips in 2016 by Carl Benjamin, now one of his party’s principal candidates in the European elections.

According to Batten, Benjamin is a “classical liberal”, “not a bad person”, “a proponent of free speech” and “wasn’t actually making a literal statement”. And there we were, thinking that he was just a vile misogynist, using social media to declare whether, in his opinion, a member of parliament should be raped or not.

Unless you rubber stamp Israel’s foreign and Palestinian polities, you are open to question? 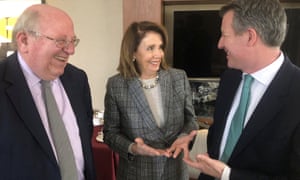 The senior US Democrat Nancy Pelosi met three former Labour MPs on Sunday and discussed their concerns about antisemitism in the party before a meeting with the party’s leader, Jeremy Corbyn.

The House Speaker said she had met Mike Gapes, Chris Leslie and Ian Austin “to hear their perspective on Brexit, why they left the Labour party, and the importance of standing unequivocally against antisemitism wherever it is found”.

When he starts wearing little boy pants to go with his little boy tantrums! 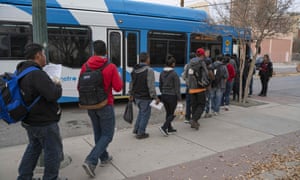 Donald Trump appears determined to send migrants arrested at the southern border to “sanctuary cities” around the US, a scheme meant to exact revenge on his Democratic foes, despite fierce political opposition and doubts over the legality of such a move.

He is setting his supporters against other Democrats? Russian cyber-warriors job just made easier… The Vermont senator’s criticism of the Center for American Progress threatens to inflame the ideological divisions that roiled the Democratic Party in 2016.

I thought she took Sunday off from lying for her boss?

On April 12, 1997 I received a call from my brother, Private First Class Tayyib M. Rashid, a newly minted U.S. Marine. He had called to tell us he had just graduated from boot camp. Ours is an immigrant family, and his service was a source of pride and validation for all of us. We were Americans in a new sense now. This year I filed to run for Virginia Senate — an extension of the American dream my immigrant family and I have cherished. But the fact is that Muslims have been in the United States before the states were created — let alone united. Historians believe that 15 to 30 percent of Africans enslaved and trafficked here were Muslim. Yet, some 400 years later we’re still considered outsiders. Conservative outrage over Rep. Ilhan Omar’s recent comments at a civil rights banquet hosted by the Council on American-Islamic Relations (CAIR) exemplify this exclusion. Speaking about the need for strong civil rights protections, especially for Muslim Americans, Omar said: “CAIR was founded after 9/11 because they recognized that some people did something, and that all of us were starting to lose access to our civil liberties.”

with summer coming fast i just wanna share a psa on wasps and why they’re good too.

– they do serve a purpose in the ecosystem. wasps are vital predators of aphids and blackflies. with no predation,
one cabbage aphid could cover our planet in 822 million tonnes of bugs
because they’re so fertile, as estimated by zoologist mark carwardine.
not only do wasps eat for themselves, but they need to provide for their
grubs too, so that’s even more aphids getting picked off every day. parasitic wasps of the family trichogrammatidae are used in
horticulture for biological control of pests. trichogramma galloi is
used to control sugarcane borers and encarsia formosa is used to control
whitefly, a pest of tomato, cucumber, aubergine and strawberry. on some
farms they even replace chemical pesticides. 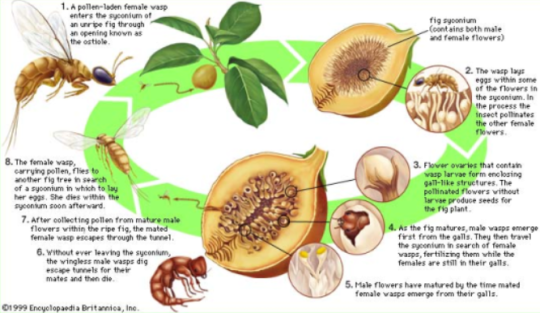 – they are effective pollinators with some species contributing
massively to the maintenance of plant populations.
there are over 800 species of fig tree and each one has its own specific
fig wasp. without one another, neither the fig nor fig wasp can
complete their
life-cycle – a clear example of co-evolution that has been successful
for over 60 million years. Figs are a keystone species in
tropical regions worldwide – their fruit supports the diets of at least
1,274 mammals and birds, meaning that the extinction of fig wasps would
therefore be
catastrophic in tropical ecosystems. furthermore,

at least 100 orchid species rely on european wasps and common wasps for
pollination.

– paper wasps and potter wasps make amazing artists. they can construct flawless nests made of wood and create stunning miniature pot nests out of nothing but mud and saliva. in one amazing case, a colony of paper wasps constructed a rainbow-coloured nest using coloured sheets of paper as shown on the right. (menchetti 2016)

– wasps are socially intelligent. not only can paper wasps recognise each other by the colour patterns on their faces, but they can still do so after at least one week apart. (sheehan and tibbetts 2008) european wasps can learn to recognise human faces. despite having no evolutionary reason for doing so, they construct holistic representations of complex images to remember a specific human face.  (avarguès-weber et al 2018) sand wasps tend to two or three chambers each day. each chamber is in a
different location and each larva is at a different developmental
stage. it was found that they learn the configuration of landmarks
around each concealed chamber in order to find them. this means that the
wasp learns where the chambers are and which action is needed at each.
(baerends 1939)

– the world’s smallest known insect is a fairy wasp! at only 139-240 micrometres long, dicopomorpha echmepterygis is smaller than some paramecium and amoeba species. the fairy wasp family also contains the smallest flying insect, kikiki huna. adult lifespans are very short, only lasting for a few days. several species are used as biological pest control agents. some species are even aquatic, using their wings as tiny paddles to swim around. 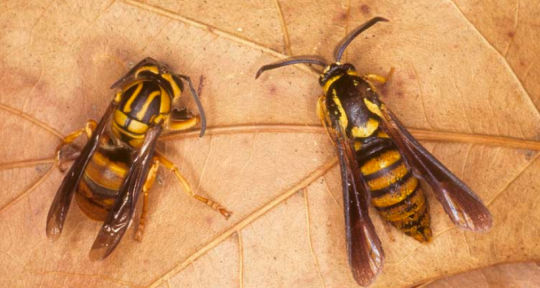 – social wasps are frequent models for batesian mimicry and müllerian mimicry. this means that non-stinging insects use wasps as a base to appear threatening to predators. their presence thus changes how other insects evolve. even bees such as the nomad bee have evolved to mimic wasps. (yellowjacket wasp on the left, clearwing moth on the right.)

Wasps are such important regulators of plant pests that some plant species will release a chemical message to summon nearby wasps when they are being heavily eaten by pests.

Wasps are friends just as much as bees!!

Look I got stung in the face yesterday but I ain’t even mad about it because as much as this sucks, having a pest free garden and not having my house doused in chemicals is super rad.