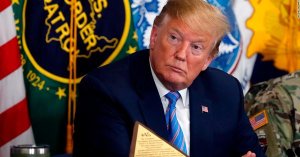 Trump told Customs and Border Patrol agents last week to refuse to allow any migrants through the border in defiance of federal laws and court orders, CNN reported Monday.

On Friday, during a visit to Calexico, Calif., Trump told border patrol agents behind the scenes not to let any migrants in and, if ordered to by a judge, to respond, “Sorry, judge, I can’t do it. We don’t have the room,” two sources told CNN.

When the agents later asked their commanding officers about the remarks, their superiors said policy was to obey the law and that they would face personal liability if they complied with Trump’s orders, according to the network.

The news comes amid the ouster of Homeland Security Secretary Kristjen Nielsen, who has frequently found herself the subject of Trump’s ire over illegal immigration policy.

“Presidents are not allowed to order people to break the law,” @BillKristol says in response to reporting that President Trump pushed to close the US-Mexico border at El Paso, Texas, and told agents not to admit migrants and to resume family separations. https://t.co/6X7OgyXLRm pic.twitter.com/6DvFe1KUqR

During Friday’s trip to the border, Trump reportedly told Nielsen and Secretary of State Mike Pompeo to shut down the port of El Paso on March 22, with plans to close other ports later.

Nielsen pushed back on the idea, arguing that closing down the ports would simply shut down legal commerce and travel while migrants entered between the ports. Trump reportedly responded “I don’t care,” according to two people in the room, CNN reports.

Acting White House chief of staff Mick Mulvaney was eventually able to talk Trump out of the plan, leading Trump to pivot to instead refusing entry to asylum seekers. Nielsen allegedly tried in vain to explain to Trump that migrants from Central America are legally allowed to apply for asylum.

Monday’s articles echo earlier reports from NBC News that Nielsen’s resignation Sunday night was largely due to Trump pressuring her to resume the separation of parents from their children at the border. Trump argued family separation was the most effective deterrent, while Nielsen reminded him he had already signed an executive order ending the practice, according to NBC.

The family-separation policy led to sharp and bipartisan backlash last year, with even some of Trump’s strongest allies decrying it before the president backtracked and ended the practice.

The White House and DHS did not immediately respond to a request for comment from The Hill.