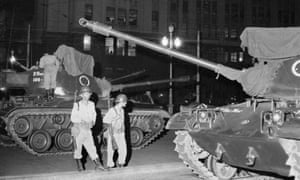 After they were arrested by military policemen in 1977 for leaving leftwing pamphlets outside a Brazilian factory near São Paulo, Márcia Paes and Celso Brambilla were tortured for 10 days straight.

“Where are the weapons?” their captors repeatedly asked them, as they attempted to link them to leftist guerrilla groups who had taken up arms against Brazil’s military rulers.